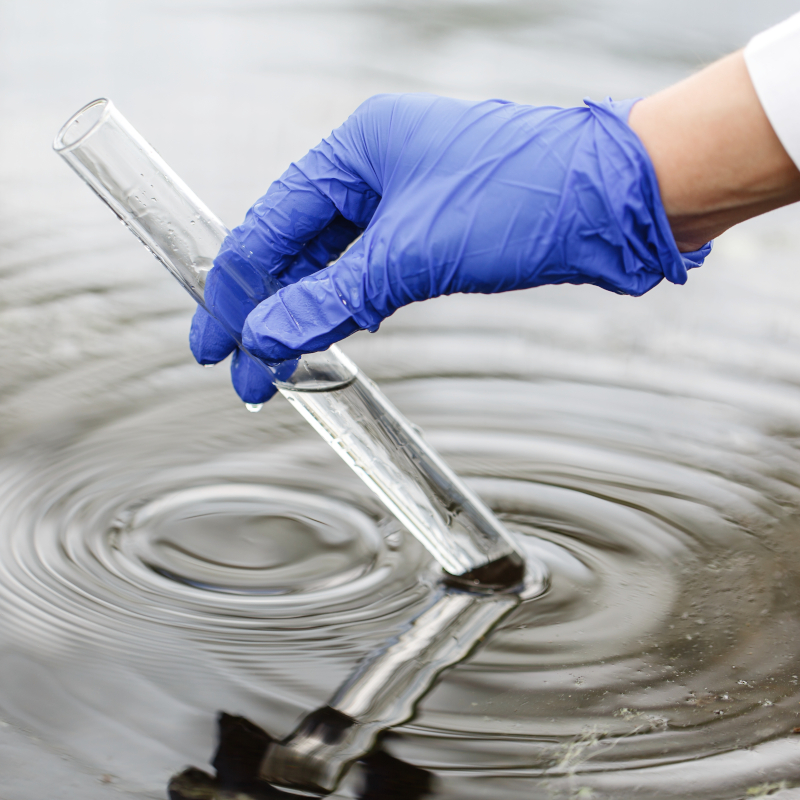 Proper collection and handling of a water sample is critical for a meaningful water test. Sample containers should always be obtained from the testing laboratory because containers may be specially prepared for a specific contaminant. Sampling and handling should be followed carefully.

Note: Under ideal conditions, some bacteria can double in quantity every twenty minutes. Under these conditions one microbe could potentially multiply to over one million microbes in about four hours. It is critical, therefore, that you refrigerate the sample and transport it to the testing laboratory within six hours (in an ice chest). Do not deliver the sample to a lab on Friday as it may not be tested until the following Monday. Mailing bacteria samples is not recommended because laboratory analysis results are typically unreliable.

Direct testing for pathogens is very expensive and impractical because pathogens are rarely found in waterbodies. Instead, monitoring for pathogens uses “indicator” species—so called because their presence indicates that fecal contamination may have occurred.

The four indicators most commonly used today by both volunteer and professional monitors—total coliforms, fecal coliforms, E. coli, and enterococci—are bacteria that are normally prevalent in the intestines and feces of warm-blooded animals, including wildlife, farm animals, pets, and humans. The indicator bacteria themselves are not usually pathogenic. Even though fecal coliform bacteria have some deficiencies when it comes to being a “perfect” indicator, they are generally considered the best available indicators of contamination at the present time.

Total coliforms, fecal coliforms, E. coli, and enterococci are easy to grow in a lab, and all will be present in large numbers if recent fecal contamination has occurred. Unfortunately, one problem with the indicators is the question of source. All the indicators can come from animals, and some can also come from plants or soil. Another problem is that none of the indicators accurately reflect the potential for human health effects, though some do a better job than others. Because of these and other complications, microbiologists are still looking for better indicators. In the meantime, volunteer monitors and public health agencies alike must do their best with the presently available indicators.

The above information was gleaned from the EPA’s document Voluntary Estuary Monitoring Manual, Chapter 17: Bacteria Indicators of Potential Pathogens

Coliform bacteria can be found virtually everywhere – in soil, on skin, on animals, insects, in lakes and rivers, etc. Coliform bacteria are indicator organisms, which are used, in water microbiological analysis. These indicator organisms may be accompanied by pathogens (i.e., disease-causing organisms). The presence of coliform bacteria in drinking water is generally a result of a problem with water treatment or the pipes which distribute the water, and possible contamination by disease-causing microorganisms although the coliform themselves are not harmful. Coliform bacteria are not pathogenic (disease causing) organisms but are a natural part of the microbiology of the intestinal tract of warm-blooded mammals, including man. Coliforms, rather than the actual pathogens, are used to assess water quality because they can be easily detected and, since they are non-disease causing, they pose less risk to laboratory technicians. The total coliform group is relatively easy to culture in the lab, and therefore, has been selected as the primary indicator bacteria for the potential presence of other disease-causing organisms.

When coliforms are present in unfiltered raw water, it is presumed that the larger disease-causing organisms (pathogens) accompany them. This presumption, however, is fallacious with respect to removing pathogens by way of filtration. During the filtration process larger pathogenic bacteria (see table below) can be removed while smaller non-disease causing (heterotrophic) bacteria pass through the filtration system. When this happens, the presence of the smaller heterotrophic bacteria does not indicate the presence of any larger pathogenic organisms. *

Approved tests for total coliform bacteria include the membrane filter, multiple tube fermentation, MPN and MMO-MUG (“Colilert”) methods. The membrane filter method uses a fine porosity filter, which can retain bacteria. The filter is placed in a petri (culture) dish on a pad with growth enrichment media (mEndo) and is incubated for 24 hrs at 35 degrees C. Individual bacteria cells, which collect on the filter, grow into dome-shaped colonies. The coliform bacteria have a gold-green sheen and are counted directly from the dish. Since some other bacteria may develop a similar color, a confirmation test using more specific media is required. The confirmation procedure requires an additional 24 to 48 hrs to complete the test for suspected positive total coliform tests.

* Black Berkey™ purification elements have been tested with over one billion E-coli microbes per liter (lawn growth). This contamination level is greater than 10,000 times the colony formation (number of pathogens) typically used when testing a filtration element for its ability to remove E-coli. The results showed no detectable pathogens present within the filtered water (effluent). The water was then incubated. Again, no pathogens propagated, and none were detectable when inspected under an electron microscope.

This article was provided to us courtesy of New Millennium Concepts, Ltd. (NMCL), the manufacturer of Berkey® Water Systems and products.