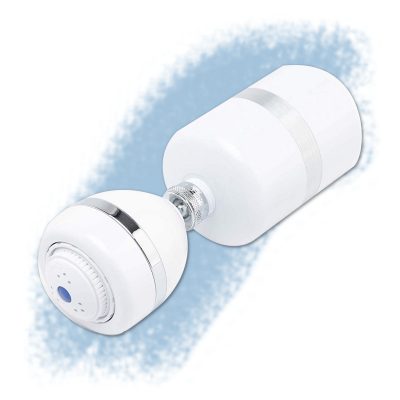 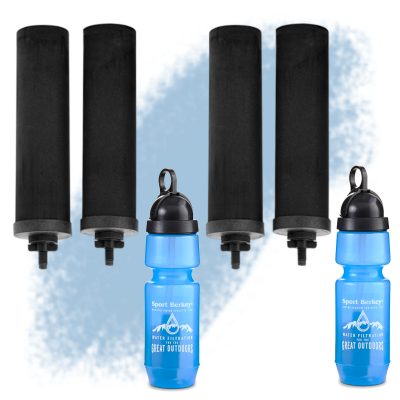 Our Shower Filter, designed for those who want the benefits of showering in filtered water:

Our Shower Filter will typically last 25,000 gallons or one year, whichever comes first. While testing was performed under standard laboratory conditions, actual performance may vary. Our Shower Filter contains a new and improved shower filtration media, which is most effective in reducing free chlorine, hydrogen sulfide, scale and iron oxide (rust water). The Shower Filter process media works in a wide range of temperatures with a maximum operating temperature of 120 degrees Fahrenheit.

In the shower environment, chlorine can either be in liquid or gas state. At higher water temperatures in the enclosed shower stall, free-chlorine moves from the liquid to the gas state, where it vaporizes and subsequently is inhaled. The United States regulates all shower head flow at 2.5 gallons per minute. Thus, the science behind shower filtration must take into account the unique situation in the shower, including temperature, flow rate and volume.

Since chlorination is a long established public health practice necessary for the disinfection of drinking water, consumers are aware of the health benefit drinking filtered water can provide. However, it’s surprising for some people to learn that 50% of their daily exposure is in the shower. The other 50% comes from their drinking water. Therefore, filtering shower water is equally as important as filtering drinking water.

Documented scientific studies conclude that taking long hot showers is a potential health risk. In the enclosed shower stall, chlorine vaporizes where it is inhaled. To a lesser degree, dermal absorption also occurs. Chlorine is added to kill pathogenic microorganisms, such as bacteria. The highly reactive chlorine combines with fatty acids and carbon fragments to form a variety of toxic compounds. Medical studies suggest a link between absorption and inhalation of chlorine in the shower environment with elevated risks for diseases and serious illness. Showering in chlorinated water may also cause pre-existing conditions such as asthma and eczema, to become exacerbated.

In addition to the benefits of filtering water, there are cosmetic benefits. Symptoms of chlorine exposure are dry and/or flaking skin, dry brittle hair and red irritated eyes. Filtering your shower water reduces these symptoms.

Using a patented blend of high-purity calcium, copper and zinc; Our Shower Filter works on a similar principle to a Catalytic Converter in an automobile. In shower filtration free-chlorine is converted into a harmless chloride. The scientific name for this chemical reaction is known as “Reduction-Oxidation”, commonly referred to as Redox. Redox reactions can be chemically complex. Simply stated, during a Redox reaction electrons are transferred between molecules, creating new elements. For instance, when free-chlorine comes in contact with the filtration media, it is changed into a benign water-soluble chloride. This reaction changes free-chlorine to a larger chloride element. This is too large to evaporate or be absorbed by the skin. It is then carried harmlessly through the water supply. 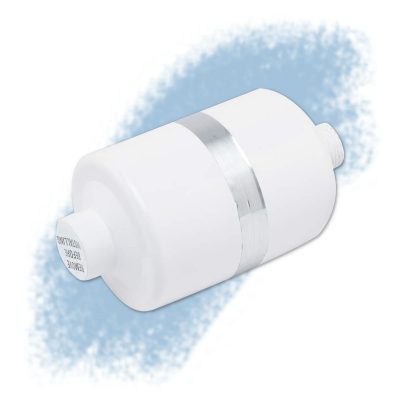